While there are several centers pursuing research in developing a natural and intuitively controlled robotic prosthesis, very few researchers have been successful in developing a system that can be translated into real-life settings, outside the laboratories or controlled environments in the long term. To this end, Integrum AB introduced the e-OPRA Implant system with the first surgery in 2013, where the OPRATM Implant System was upgraded with the addition of neuromuscular electrodes, permanently implanted in an amputee, thereby connecting the prosthesis not only to the patient’s bone but also to nerves and muscles. Following the success with this pilot patient, Integrum sponsored a clinical trial to validate the technology. The study was conducted by a collaboration between Sahlgrenska University Hospital, the University of Gothenburg and Chalmers University of Technology, in addition, Researchers at the Medical University of Vienna in Austria, and the Massachusetts Institute of Technology in USA were also involved.

A long term clinical report for the e-OPRATM Implant System has been published by the renounced medical journal, The New England Journal of Medicine, on April 30th, 2020.  The clinical report1 shows the feasibility and competent performance of the e-OPRATM Implant System in 3 patients with above-elbow amputations monitored over 3-7 years.  All patients had previously received the OPRATM Implant System. This system consists of a threaded titanium Fixture, surgically inserted into the bone, and an Abutment that extends out of the body, percutaneously. The Fixture and the Abutment are held together by an Abutment Screw. The Abutment Screw was replaced with a hollow e-OPRATM Abutment Screw, through which electrodes were routed and implanted in nerves and muscles, creating a bidirectional wired communication pathway between the body and the prosthesis.

The e-OPRATM Implant System is self-contained with no external batteries, wires, and accessories, which is essential for seamlessly using such technology for prolonged periods outside the laboratory. The study demonstrated that this mind-controlled system improved precision and natural control, and in addition, was able to provide artificial sensations of touch. The report shows that the e-OPRATM Implant System is stable and safe in the long term and can be used without supervision or limitations of controlled environments.

The report also illustrated the inspiring changes to the lifestyle of the patients, encouraged by the improved functionalities their prostheses now allowed.

"It is exciting to see that our technology is reliably translatable to real-life settings and can positively impact the lives of people with amputation.", says Maria Lopez, CEO. 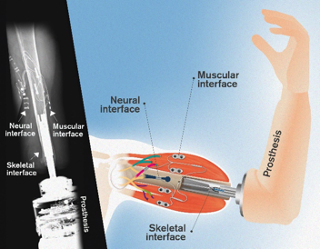 The neuromusculoskeletal prosthesis has a direct connection to a person's nerves, muscles, and skeleton. The neural interfaces are electrodes wrapped around the severed nerves. The muscular interfaces consist of electrodes implanted on the biceps and triceps muscles. The skeletal interface comprises a titanium screw that is osseointegrated within the bone – meaning that the bone cells are directly attached to it, providing mechanical stability. Part of the skeletal interface extends out of the body through the skin and connects to the prosthetic arm. Electrical connectors embedded in the skeletal interface provide bidirectional communication between the prosthesis and the electrodes implanted in nerves and muscles. Photographer / Source Illustration: Sara Manca /Yen Strandqvist/Chalmers University of Technology

Erik Penser Bank AB, Certified Adviser can be reached at +46 8 463 8000 or certifiedadviser@penser.se